One hundred years ago, the RMS Titanic sank in the North Atlantic Ocean. It was a modern day Tower of Babel—an ill-fated engineering and technological marvel of colossal proportions. A century on, our fascination with the Titanic’s maiden voyage hasn’t faded at all.

The April 14-15, 1912, sinking of the cruise ship remains the most famous maritime disaster in history. People still crave Titanic tales, from the nationwide re-release of the 1997 blockbuster “Titanic” in 3-D to a new Titanic exhibit at the Brucemore cultural center in Cedar Rapids.

Reason for the Disaster :

100 years ago today, the Titanic ran into some trouble by hitting on the ice bergs. The CGI video put together by James Cameron and National Geographic is probably the best, most succinct explanation of the Titanic’s demise to date. The video is here:

Discovery’s recap of the last moments best sum up the tragedy:

At 2.15 a.m. the water had already reached the level of the first funnel. Rumbling, crackling and roaring noises followed. The lighting on board flickered and finally went out. The stern tilted up to a 45 degree angle. The critical load at a point between the third and fourth funnels had been reached and the ship split apart down the middle under its enormous weight. The larger part reared up again by 75 metres and then the ship that had been considered unsinkable went down, bow first. Although a few hundred places were theoretically still vacant, the people in the lifeboats rowed away from those in the water crying for help for fear that their boat would capsize if too many people tried to climb on board. Only lifeboat number four turned round and picked up five people floating in the water, two of whom died in the lifeboat.

After leaving Southampton on 10 April 1912, Titanic called at Cherbourg in France and Queenstown (now Cobh) in Ireland before heading westwards towards New York. On 14 April 1912, four days into the crossing and about 375 miles (600 km) south of Newfoundland, she hit an iceberg at 11:40 pm (ship’s time; GMT−3). The glancing collision caused Titanic‘s hull plates to buckle inwards in a number of locations on her starboard side and opened five of her sixteen watertight compartments to the sea. Over the next two and a half hours, the ship gradually filled with water and sank. Passengers and some crew members were evacuated in lifeboats, many of which were launched only partly filled. A disproportionate number of men – over 90% of those in Second Class – were left aboard due to a “women and children first” protocol followed by the officers loading the lifeboats. Just before 2:20 am Titanic broke up and sank bow-first with over a thousand people still on board. Those in the water died within minutes from hypothermia caused by immersion in the freezing ocean. The 710 survivors were taken aboard from the lifeboats by RMS Carpathia a few hours later. 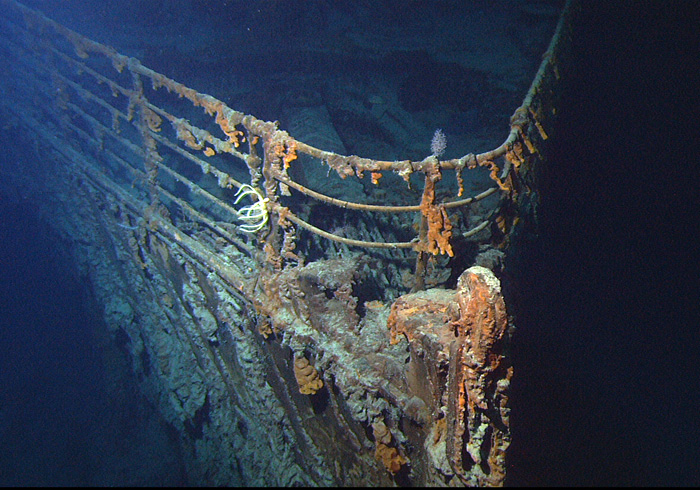 The bow of the wrecked RMS Titanic, photographed in June 2004

The sinking of Titanic caused the deaths of 1,514 people in one of the deadliest peacetime maritime disasters in history. She was the largest ship afloat at the time of her maiden voyage. One of three Olympic class ocean liners operated by the White Star Line, she was built between 1909–11 by the Harland and Wolff shipyard in Belfast. She carried 2,223 people.