The Bermuda Triangle (a.k.a. the Devil’s Triangle) is a triangular area in the Atlantic Ocean bounded roughly at its points by Miami, Bermuda, and Puerto Rico. Legend has it that many people, ships and planes have mysteriously vanished in this area. How many have mysteriously disappeared depends on who is doing the locating and the counting. The size of the triangle varies from 500,000 square miles to three times that size, depending on the imagination of the author. (Some include the Azores, the Gulf of Mexico, and the West Indies in the “triangle.”) Some trace the mystery back to the time of Columbus. Even so, estimates range from about 200 to no more than 1,000 incidents in the past 500 years. Howard Rosenberg claims that in 1973 the U.S. Coast Guard answered more than 8,000 distress calls in the area and that more than 50 ships and 20 planes have gone down in the Bermuda Triangle within the last century. 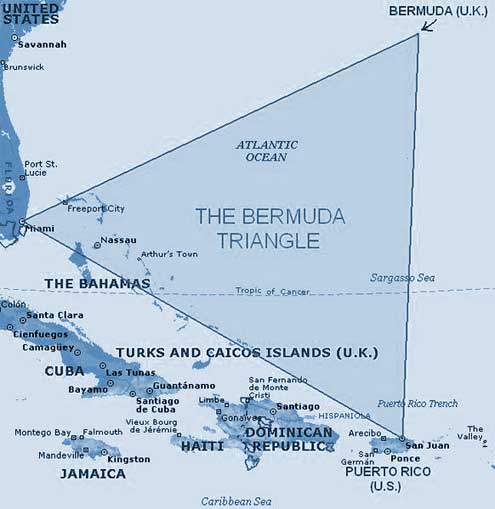 Many theories have been given to explain the extraordinary mystery of these missing ships and planes. Evil extraterrestrials, residue crystals from Atlantis, evil humans with anti-gravity devices or other weird technologies, and vile vortices from the fourth dimension are favorites among fantasy writers. Strange magnetic fields and oceanic flatulence (methane gas from the bottom of the ocean) are favorites among the technically-minded. Weather (thunderstorms, hurricanes, tsunamis, earthquakes, high waves, currents, etc.) bad luck, pirates, explosive cargoes, incompetent navigators, and other natural and human causes are favorites among skeptical investigators.

There are some skeptics who argue that the facts do not support the legend, that there is no mystery to be solved, and nothing that needs explaining.The number of wrecks in this area is not extraordinary, given its size, location and the amount of traffic it receives. Many of the ships and planes that have been identified as having disappeared mysteriously in the Bermuda Triangle were not in the Bermuda Triangle at all. Investigations to date have not produced scientific evidence of any unusual phenomena involved in the disappearances. Thus, any explanation, including so-called scientific ones in terms of methane gas being released from the ocean floor, magnetic disturbances, etc., are not needed. The real mystery is how the Bermuda Triangle became a mystery at all.

The modern legend of the Bermuda Triangle began soon after five Navy planes [Flight 19] vanished on a training mission during a severe storm in 1945. The most logical theory as to why they vanished is that lead pilot Lt. Charles Taylor’s compass failed. The trainees’ planes were not equipped with working navigational instruments. The group was disoriented and simply, though tragically, ran out of fuel. No mysterious forces were likely to have been involved other than the mysterious force of gravity on planes with no fuel. It is true that one of the rescue planes blew up shortly after take-off, but this was likely due to a faulty gas tank rather than to any mysterious forces.

Over the years there have been dozens of articles, books, and television programs promoting the mystery of the Bermuda Triangle. In his study of this material, Larry Kushe found that few did any investigation into the mystery. Rather, they passed on the speculations of their predecessors as if they were passing on the mantle of truth. Of the many uncritical accounts of the mystery of the Bermuda Triangle, perhaps no one has done more to create this myth than Charles Berlitz, who had a bestseller on the subject in 1974. After examining the 400+ page official report of the Navy Board of Investigation of the disappearance of the Navy planes in 1945, Kushe found that the Board wasn’t baffled at all by the incident and did not mention alleged radio transmissions cited by Berlitz in his book. According to Kushe, what isn’t misinterpreted by Berlitz is fabricated. Kushe writes: “If Berlitz were to report that a boat were red, the chance of it being some other color is almost a certainty.” (Berlitz, by the way, did not invent the name; that was done by Vincent Gaddis in “The Deadly Bermuda Triangle,” which appeared in the February, 1964, issue of Argosy, a magazine devoted to fiction.)

In short, the mystery of the Bermuda Triangle became a mystery by a kind of communal reinforcement among uncritical authors and a willing mass media to uncritically pass on the speculation that something mysterious is going on in the Atlantic.